Work exhibited during Festaccio (2018) in the Città dell’Atra Economia (Rome), in Lodz (Poland) in the “Killimg Paradise” Fifth edition of the International FotoFestival (May 2006) where the artist was invited as honor guest and in Rome for the solo exhibition in Salon Privé Arti Visive gallery (October 2004)

The strip is composed of photos taken from the tabloids and the web, manipulated and reassembled sarcastically and provocatively, mainly images of pain contaminated by other images reflecting a not suffering society. The result is a unipatial and timeless place of paradoxical coexistence, dominated by the icons of a tormented humanity, offered to the indifference of a glance which has now learned to ignore the sense of the tragedy they represent. The artist uses methodologies and languages ​​of the media circuits. The strip is in fact printed on an industrial support of perforated pvc, like the advertising panels that cover the buildings during work of renovation in urban centers or city public transport. The project also includes a short “video” which with the technique of video clips focuses on the make-up of a young woman in front of a precious mirror in which visions of devastation and death flow. In the booklet-catalog that accompanies the exhibition, finally, Giusy Lauriola, tells her existential and artistic journey with the characteristic that starting from really happened events is lost in the imagination, creating a narrative place in which it is difficult to identify the reality. 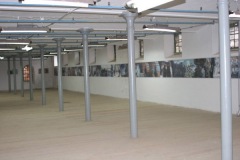 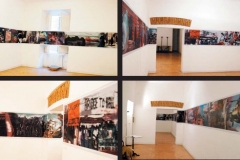 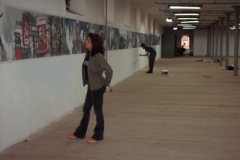 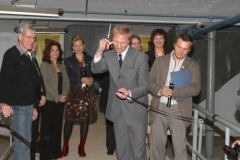 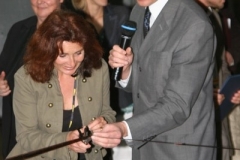 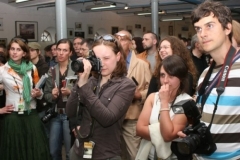 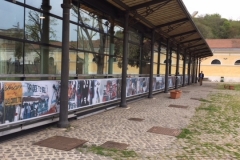 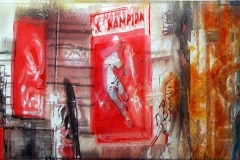 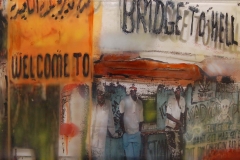